You grow up the day you have your first real laugh at yourself.

Ethel Barrymore
When life knocks you to your knees, which it always does and always will—well, that's the best position in which to pray, isn't it?

Ethel Barrymore
For an actress to be a success, she must have the face of a Venus, the brains of a Minerva, the grace of Terpsichore, the memory of a Macaulay, the figure of Juno, and the hide of a rhinoceros.

Ethel Barrymore
Fundamentally I feel that there is as much difference between the stage and the films as between a piano and a violin. Normally you can't become a virtuoso in both. 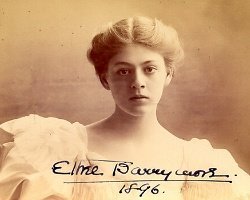 Creative Commons
Born: August 15, 1879
Died: June 18, 1959 (aged 79)
Bio: Ethel Barrymore was an American actress and a member of the Barrymore family of actors. Regarded as the "First Lady of the American Theater", Barrymore was a preeminent stage actress in her era. Barrymore's career spanned six decades.
Known for: