After months of want and hunger, we suddenly found ourselves able to have meals fit for the gods, and with appetites the gods might have envied.

Ernest Shackleton
The noise resembles the roar of heavy, distant surf. Standing on the stirring ice one can imagine it is disturbed by the breathing and tossing of a mighty giant below.

Ernest Shackleton
Superhuman effort isn't worth a damn unless it achieves results.

Ernest Shackleton
I called to the other men that the sky was clearing, and then a moment later I realized that what I had seen was not a rift in the clouds but the white crest of an enormous wave.

Ernest Shackleton
Difficulties are just things to overcome after all.

Ernest Shackleton
The outstanding feature of today's march is that we have seen new land to the South never seen by human eyes before great snow clad heights [which] we did not see on our journey South on the last Expedition for we were too close to the land or rather foothills and now at the great distance we are out they can plainly be seen.

Ernest Shackleton
No person who has not spent a period of his life in those 'stark and sullen solitudes that sentinel the Pole' will understand fully what trees and flowers, sun-flecked turf and running streams mean to the soul of a man

Ernest Shackleton
A man must shape himself to a new mark directly the old one goes to ground.

Ernest Shackleton
At the bottom of the fall we were able to stand again on dry land. The rope could not be recovered. We had flung down the adze from the top of the fall and also the logbook and the cooker wrapped in one of our blouses. That was all, except our wet clothes, that we brought out of the Antarctic, which we had entered a year and a half before with well-found ship, full equipment, and high hopes. That was all of tangible things; but in memories we were rich. We had pierced the veneer of outside things. We had "suffered, starved and triumphed, groveled down yet grasped at glory, grown bigger in the bigness of the whole. We had seen God in His splendours, heard the text that Nature renders." We had reached the naked soul of man.

Ernest Shackleton
One feels 'the dearth of human words, the roughness of mortal speech' in trying to describe things intangible.

Ernest Shackleton
Loneliness is the penalty of leadership, but the man who has to make the decisions is assisted greatly if he feels that there is no uncertainty in the minds of those who follow him, and that his orders will be carried out confidently and in the expectation of success.

Ernest Shackleton
After the conquest of the South Pole by Amundsen who, by a narrow margin of days only, was in advance of the British Expedition under Scott, there remained but one great main object of Antarctic journeying - the crossing of the South Polar continent from sea to sea 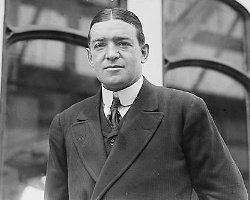 Creative Commons
Born: February 15, 1874
Died: January 5, 1922 (aged 47)
Bio: Sir Ernest Henry Shackleton was a polar explorer who led three British expeditions to the Antarctic, and one of the principal figures of the period known as the Heroic Age of Antarctic Exploration.
Known for: