But if we continue in sin, and rebel and harden our hearts, we shall become so inured and fixed in it, that it will be natural, and we shall choose it from time to time.

Elias Hicks
And yet you see the weakness of external evidence-and outward miracles; they were not sufficient to make true believers, or to make the Israelites believe that Jesus was their promised Messiah.

Elias Hicks
People talk about revelation, and say it has ceased; but what ignorance it bespeaks, when man knows not the least thing on earth without revelation.

Elias Hicks
The more strictly and faithfully every man and woman lives up to the guidance and teaching of this Inward Anointing - and never turns aside to the right hand or left for the precepts and traditions of men - the more instruction and help they afford one another.

Elias Hicks
That I feel a desire, my friends, that we in this latter day of the world, in which light is fast spreading, that we should be willing to attend to those portions of the Scriptures of truth that direct us home to the foundation.

Elias Hicks
Just as a son, to be a son of man, must be of the same nature and spirit of his father; so with the sons of God, and so it will be with all who are born of the spirit of God.

Elias Hicks
I delight not in spreading any thing mysterious, for I consider it all lost time; but the things that all of us can see and know if we will. 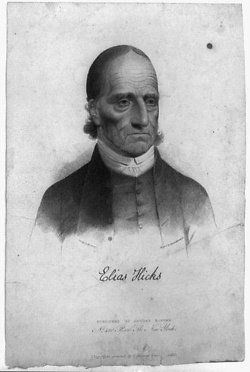 Creative Commons
Born: March 19, 1748
Died: February 27, 1830 (aged 81)
Bio: Elias Hicks was a traveling Quaker preacher from Long Island, New York. In his ministry he promoted doctrines that embroiled him and his followers in a controversy which caused the first major schism within the Religious Society of Friends.
Known for: