Egon Schiele
At present, I am mainly observing the physical motion of mountains, water, trees and flowers. One is everywhere reminded of similar movements in the human body, of similar impulses of joy and suffering in plants...

Egon Schiele
Bodies have their own light which they consume to live: they burn, they are not lit from the outside. 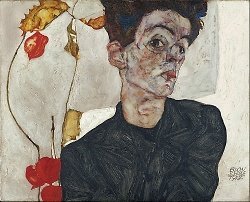 Creative Commons
Born: June 12, 1890
Died: October 31, 1918 (aged 28)
Bio: Egon Schiele was an Austrian painter. A protégé of Gustav Klimt, Schiele was a major figurative painter of the early 20th century. His work is noted for its intensity and its raw sexuality, and the many self-portraits the artist produced, including naked self-portraits.
Known for: