So, once again, these are not political deals but an informed choice. At the same time, we need to take note of everything that happens around Russia. If some of our projects with Europe, America or others are put on ice (I'm not talking about the reasons behind this), we logically move these projects to other destinations.

Dmitry Medvedev
Germany is our second biggest trade partner after China, but some time ago it was first. China is developing rapidly and has already become the world's largest economy in terms of purchasing power parity. At any rate, as you know, on 8 October China was recognised as such, but naturally the US economy is much bigger overall for the time being.

Dmitry Medvedev
Somebody should be extremely punctual, while somebody else is exhausting all the limits for being late.

Dmitry Medvedev
Corruption is a global problem. But it is more widespread in rapidly developing countries. It is a growth problem. There are many corruption-related problems in Russia too. So, regarding stress tests, I think that such tests should be applied to all companies.

Dmitry Medvedev
We are absolutely sure that, without urgent modernisation, the Russian economy has no future, even with the enormous natural resources Russia has.

Dmitry Medvedev
Instead of the primitive raw material economy, we will create a smart economy generating unique knowledge, new useful things and technologies. Instead of the archaic society, in which the leaders think and make decisions for everyone, we will become a country of intelligent, free and responsible people.

Dmitry Medvedev
I tell you the first and last time. Together with a nuclear suitcase the president has a folder, which is top secret and devoted entirely to the report by the Russian secret service which handles the control of extraterrestrials in our country. After the term, the two folders and a small nuclear suitcase are transferred to the new president. How many of them are among us I cannot say because panic might begin.

Dmitry Medvedev
I believe in Father Frost. But not too deeply. But anyway, you know, I'm not one of those people who are able to tell the kids that Father Frost does not exist.

Dmitry Medvedev
We have nothing against the dollar, and I don't think China has anything against it either. But we believe that a modern currency system should be better balanced, so that when one of the currencies is sagging, this should be compensated by other global reserve currencies.

Dmitry Medvedev
It is impossible to restore what is gone, obviously. I was born in the Soviet Union at about the same time as you (although we lived under different systems, we still listened to the same music, as we found out) but the world has changed since then, and the Soviet Union no longer exists. We have the Russian Federation, which is based on a Constitution adopted by our people. This Constitution proclaims the same set of values that is accepted by the absolute majority of humankind, notably, the supremacy of human rights, democracy, the protection of private property, market-based development and so on and so forth. I won't list all of them because these are universal values. So nobody wants to go back. There is no returning to the past. 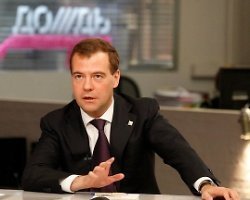 Creative Commons
Born: September 14, 1965 (age 57)
Bio: Dmitry Anatolyevich Medvedev is the tenth Prime Minister of Russia, incumbent since 2012. He previously served as the third President of Russia, from 2008 to 2012. When he took office at the age of 42, he was the youngest of the three Russian Presidents who have served.