Derrick Bell
All ethical people strive to choose "right" over "easy" when confronted by situations that force them to choose one or the other.

Derrick Bell
Resistance is a powerful motivator precisely because it enables us to fulfill our longing to achieve our goals while letting us boldly recognize and name the obstacles to those achievements.

Derrick Bell
A rule without exceptions is an instrument capable of doing mischief to the innocent and bringing grief - as well as injustice - to those who should gain exemptions from the rule's functioning.

Derrick Bell
Courage is a decision you make to act in a way that works through your own fear for the greater good as opposed to pure self-interest. Courage means putting at risk your immediate self-interest for what you believe is right.

Derrick Bell
The challenge throughout has been to tell what I view as the truth about racism without causing disabling despair.

Derrick Bell
However self-sufficient we may fancy ourselves, we exist only in relation — to our friend, family, and life partners; to those we teach and mentor; to our co-workers, neighbors, strangers; and even to forces we cannot fully conceive of, let alone define. In many ways, we are our relationships.

Derrick Bell
We live in a system that espouses merit, equality, and a level playing field, but exalts those with wealth, power, and celebrity, however gained.

Derrick Bell
Self-esteem is like a difficult-to-cultivate flower. It requires frequent nurturing that occurs when you keep your word and follow through on your promises.

Art ought never to be considered except in its relations with its ideal beauty.
Alfred de Vigny 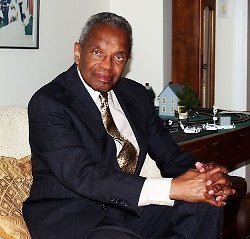 Creative Commons
Born: November 6, 1930
Died: October 5, 2011 (aged 80)
Bio: Derrick Albert Bell Jr. was the first tenured African-American professor of law at Harvard Law School and is largely credited as one of the originators of critical race theory. He was a visiting professor at New York University School of Law from 1991 until his death.
Known for: