You do what you can for as long as you can, and when you finally can't, you do the next best thing. You back up but you don't give up.

Chuck Yeager
I was always afraid of dying. Always. It was my fear that made me learn everything I could about my airplane and my emergency equipment, and kept me flying respectful of my machine and always alert in the cockpit.

Chuck Yeager
Leveling off at 42,000 feet, I had thirty percent of my fuel, so I turned on rocket chamber three and immediately reached.96 Mach. I noticed that the faster I got, the smoother the ride. Suddenly the Mach needle began to fluctuate. It went up to.965 Mach - then tipped right off the scale... We were flying supersonic. And it was a smooth as a baby's bottom; Grandma could be sitting up there sipping lemonade.

Chuck Yeager
Unfortunately, many people do not consider fun an important item on their daily agenda. For me, that was always a high priority in whatever I was doing.

Chuck Yeager
The best pilots fly more than the others; that's why they're the best. 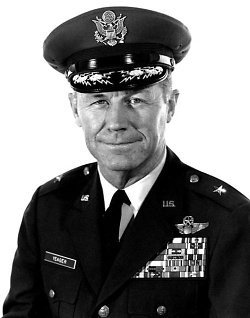