I don't think many people remember what life was like in those days … This was the era when the Russians were claiming superiority, and they could make a pretty good case — they put up Sputnik in '57; they had already sent men into space to orbit the earth… There was this fear that perhaps communism was the wave of the future. The astronauts, all of us, really believed we were locked in a battle of democracy versus communism, where the winner would dominate the world.

John Glenn
Could this have just happened?... I can't believe that... Some Power put all this into orbit and keeps it there.

John Glenn
I pray every day and I think everybody should. I don't think you can be up here and look out the window as I did the first day and look out at the Earth from this vantage point. We're not so high compared to people who went to the moon and back. But to look out at this kind of creation out here and not believe in God is, to me, impossible. It just strengthens my faith.

John Glenn
In space one has the inescapable impression that here is a virgin area of the universe in which civilized man, for the first time, has the opportunity to learn and grow without the influence of ancient pressures. Like the mind of a child, it is yet untainted with acquired fears, hate, greed, or prejudice.

John Glenn
To me, there is no greater calling … If I can inspire young people to dedicate themselves to the good of mankind, I've accomplished something.

John Glenn
The most important thing we can do is inspire young minds and to advance the kind of science, math and technology education that will help youngsters take us to the next phase of space travel. 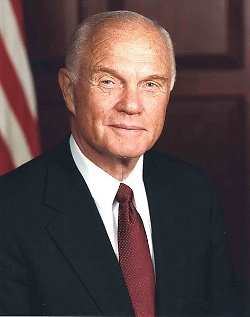 Creative Commons
Born: July 18, 1921
Died: December 8, 2016 (aged 95)
Bio: John Herschel Glenn Jr. was an aviator, engineer, astronaut, and United States senator. He was one of the Mercury Seven group of military test pilots selected in 1959 by NASA to become America's first astronauts and fly the Project Mercury spacecraft.
Known for: