Bill Finger was a contributing force on Batman right from the beginning. He wrote most of the great stories and was influential in setting the style and genre other writers would emulate … I made Batman a superhero-vigilante when I first created him. Bill turned him into a scientific detective.

Bob Kane
Bill Finger and I created the Joker. Bill was the writer. Jerry Robinson came to me with a playing card of the Joker. That's the way I sum it up. [The Joker] looks like Conrad Veidt — you know, the actor in The Man Who Laughs, [the 1928 movie based on the novel] by Victor Hugo. … Bill Finger had a book with a photograph of Conrad Veidt and showed it to me and said, 'Here's the Joker'. Jerry Robinson had absolutely nothing to do with it. But he'll always say he created it till he dies. He brought in a playing card, which we used for a couple of issues for him [the Joker] to use as his playing card.

Bob Kane
There were other Batman writers throughout the years but they could never capture the style and flavor of Bill's scripts. Bill was the best writer in the business and it seemed that he was destined to write Batman. 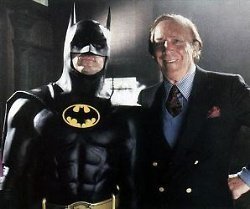