I have always condemned terrorism, because according to the glorious Koran, if you kill one innocent person, then you have killed the whole of humanity.

Zakir Naik
It is a blatant, open secret that this attack on the Twin Towers was done by George Bush himself. 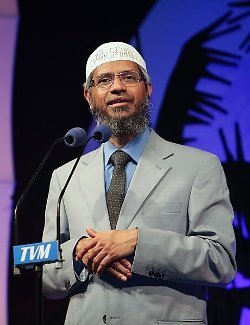 Creative Commons
Born: October 18, 1965 (age 57)
Bio: Zakir Naik is an Indian Islamic preacher, who has been called an "authority on comparative religion", "perhaps the most influential Salafi ideologue in India", and "the world's leading Salafi evangelist".
Known for: