In conclusion I congratulate you, my fellow-citizens, upon the high state of prosperity to which the goodness of Divine Providence has conducted our common country. Let us invoke a continuance of the same protecting care which has led us from small beginnings to the eminence we this day occupy.

Zachary Taylor
Hurrah for Old Kentuck! That's the way to do it. Give 'em hell, damn 'em.

Zachary Taylor
I shall pursue a straight forward course deviating neither to the right or left so that comes what may I hope my real friends will never have to blush for me, so far as truth, honesty & fair dealings are concerned.

Zachary Taylor
For more than half a century, during which kingdoms and empires have fallen, this Union has stood unshaken. The patriots who formed it have long since descended to the grave; yet still it remains, the proudest monument to their memory... 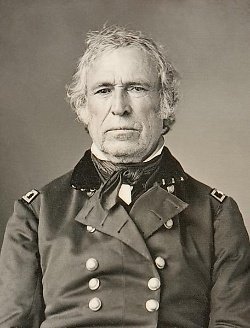 Creative Commons
Born: November 24, 1784
Died: July 9, 1850 (aged 65)
Bio: Zachary Taylor was the 12th President of the United States, serving from March 1849 until his death in July 1850. Before his presidency, Taylor was a career officer in the United States Army, rising to the rank of major general.