To subvert the tyranny of our execrable government, to break the connection with England, the never-failing source of all our political evils and to assert the independence of my country- these were my objectives. To unite the whole people of Ireland, to abolish the memory of all past dissensions, and to substitute the common name of Irishman in place of the denominations of Protestant, Catholic and Dissenter - these were my means.

Wolfe Tone
From my tenderest youth I have considered the union of Ireland with Great-Britain as the scourge of the Irish nation. And that the people of this country can have neither happiness nor freedom whilst that connection endures. Every day's experience, and every fact that arose, convinced me of this truth; and I resolved, if I could, to separate the two countries. But as I knew Ireland could not of herself, throw off the yoke, I sought for help wherever I could find it.

Wolfe Tone
To unite the whole people of Ireland, to abolish the memory of all past dissension and to substitute the common name of Irishman in place of the denominations of Protestant, Catholic and Dissenter.

Wolfe Tone
I have been lately introduced to the famous Thomas Paine, and like him very well. He is vain beyond all belief, but he has reason to be vain, and for my part I forgive him. He has done wonders for the cause of liberty, both in America and Europe, and I believe him to be conscientiously an honest man. He converses extremely well; and I find him wittier in discourse than in his writings, where his humour is clumsy enough. 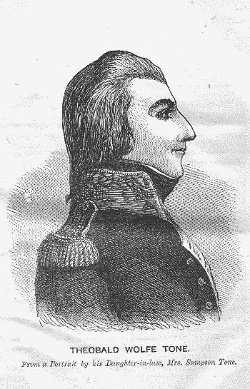 Creative Commons
Born: June 20, 1763
Died: November 19, 1798 (aged 35)
Bio: Theobald Wolfe Tone, posthumously known as Wolfe Tone, was a leading Irish revolutionary figure and one of the founding members of the United Irishmen, and is regarded as the father of Irish republicanism and leader of the 1798 Irish Rebellion.
Known for: