I loved the feeling of freedom in running, the fresh air, the feeling that the only person I'm competing with is me.

Wilma Rudolph
Winning is great, sure, but if you are really going to do something in life, the secret is learning how to lose. Nobody goes undefeated all the time. If you can pick up after a crushing defeat, and go on to win again, you are going to be a champion someday.

Wilma Rudolph
Sometimes it takes years to really grasp what has happened to your life.

Wilma Rudolph
I can't are two words that have never been in my vocabulary. I believe in myself more than anything else in this world.

Wilma Rudolph
I know black women in Tennessee who have worked all their lives, from the time they were twelve years old to the day they died. These women don't listen to the women's liberation rhetoric because they know that it's nothing but a bunch of white women who had certain life-styles and who want to change those life-styles.

Wilma Rudolph
It took sheer determination to be able to run a hundred yards and remember all of the mechanics that go along with it. It takes steady nerves and being a fighter to stay out there. 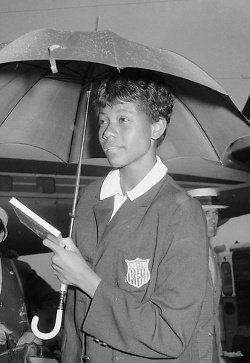