We souls on foot, with foot-folk meet: For we that cannot hope to ride For ease or pride, have fellowship.

William Barnes
But still the neäme do bide the seäme—
'Tis Pentridge—Pentridge by the river.

William Barnes
An' there vor me the apple tree
Do leän down low in Linden Lea.

William Barnes
But no. Too soon I voun' my charm abroke.
Noo comely soul in white like her—
Noo soul a-steppen light like her—
An' nwone o' comely height like her—
Went by; but all my grief agean awoke. 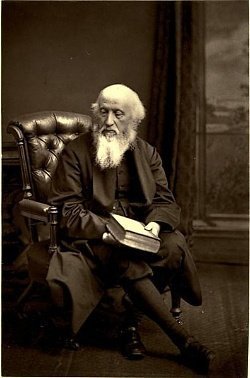 Wikipedia
Born: February 22, 1801
Died: October 7, 1886 (aged 85)
Bio: William Barnes was an English writer, poet, Church of England priest, and philologist. He wrote over 800 poems, some in Dorset dialect, and much other work, including a comprehensive English grammar quoting from more than 70 different languages.
Known for: