Wernher von Braun
[Space travel] will free man from his remaining chains, the chains of gravity which still tie him to this planet. It will open to him the gates of heaven.

Wernher von Braun
Our two greatest problems are gravity and paper work. We can lick gravity, but sometimes the paperwork is overwhelming.

Wernher von Braun
The materialists of the nineteenth century and their Marxist heirs of the twentieth, tried to tell us that, as science gives us more knowledge about the creation, we could live without faith in a Creator. Yet so far, with every new answer, we have discovered new questions. The better we understand... the master plan for the galaxies, the more reason we have found to marvel at the wonder of God's creation.

Wernher von Braun
The progress of mankind here on Earth is directly linked to the future than man builds for himself in space.

Wernher von Braun
We knew that we had created a new means of warfare, and the question as to what nation, to what victorious nation we were willing to entrust this brainchild of ours was a moral decision more than anything else. We wanted to see the world spared another conflict such as Germany had just been through, and we felt that only by surrendering such a weapon to people who are guided by the Bible could such an assurance to the world be best secured.

Wernher von Braun
Science does not have a moral dimension. It is like a knife. If you give it to a surgeon or a murderer, each will use it differently. Should the knife have not been developed?

Wernher von Braun
Our sun is one of 100 billion stars in our galaxy. Our galaxy is one of billions of galaxies populating the universe. It would be the height of presumption to think that we are the only living things in that enormous immensity.

Wernher von Braun
Nature does not know extinction; all it knows is transformation.... Everything science has taught me — and continues to teach me — strengthens my belief in the continuity of our spiritual existence after death. Nothing disappears without a trace.

Wernher von Braun
When a good scientific paper earns a student as much glory as we shower upon the halfback who scored the winning touchdown, we shall have restored the balance that is largely missing from our schools.

Wernher von Braun
For me, the idea of a creation is not conceivable without invoking the necessity of design. One cannot be exposed to the law and order of the universe without concluding that there must be design and purpose behind it all.

Wernher von Braun
Don't tell me that man doesn't belong out there. Man belongs wherever he wants to go — and he'll do plenty well when he gets there.

Wernher von Braun
My experiences with science led me to God. They challenge science to prove the existence of God. But must we really light a candle to see the sun?

Wernher von Braun
In 1492 Columbus knew less about the far Atlantic than we do about the heavens, yet he chose not to sail with a flotilla of less than three ships.... So it is with interplanetary exploration: it must be done on the grand scale.

Wernher von Braun
The more we learn about God's creation, the more I am impressed with the orderliness and unerring perfection of the natural laws that govern it.

Wernher von Braun
Everything in space obeys the laws of physics. If you know these laws, and obey them, space will treat you kindly.

Wernher von Braun
It is in scientific honesty that I endorse the presentation of alternative theories for the origin of the universe, life and man in the science classroom. It would be an error to overlook the possibility that the universe was planned rather than happening by chance.

Wernher von Braun
The rocket worked perfectly, except for landing on the wrong planet.

Wernher von Braun
If our intention had been merely to bring back a handful of soil and rocks from the lunar gravel pit and then forget the whole thing, we would certainly be history's biggest fools.

Wernher von Braun
With our present knowledge, we can respond to the challenge of stellar space flight solely with intellectual concepts and purely hypothetical analysis. Hardware solutions are still entirely beyond our reach and far, far away.

Wernher von Braun
The past few decades should have taught us to use the word "impossible" with utmost caution.

Wernher von Braun
There is beauty in space, and it is orderly. There is no weather, and there is regularity. It is predictable. 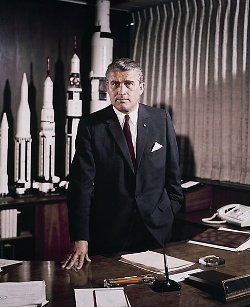