We must have religion for religion's sake, morality for morality's sake, as with art for art's sake…the beautiful cannot be the way to what is useful, or to what is good, or to what is holy; it leads only to itself.

Victor Cousin
All men have an equal right to the free development of their faculties; they have an equal right to the impartial protection of the state; but it is not true, it is against all the laws of reason and equity, it is against the eternal nature of things, that the indolent man and the laborious man, the spendthrift and the economist, the imprudent and the wise, should obtain and enjoy an equal amount of goods.

Victor Cousin
Yes, gentlemen, give me the map of any country, its configuration, its climate, its waters, its winds, and the whole of its physical geography; give me its natural productions, its flora, its zoology, &c., and I pledge myself to tell you, a priori, what will be the quality of man in history:-not accidentally, but necessarily; not at any particular epoch, but in all; in short, -what idea he is called to represent.

Victor Cousin
What is philosophy? It is something that lightens up, that makes bright. 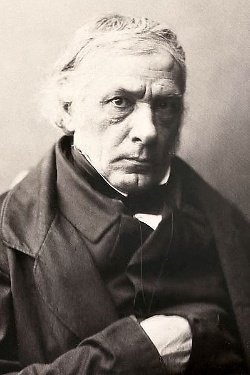 Creative Commons
Born: November 28, 1792
Died: January 14, 1867 (aged 74)
Bio: Victor Cousin was a French philosopher. He was the founder of "eclecticism," a briefly influential school of French philosophy that combined elements of German idealism and Scottish Common Sense Realism.
Known for: