Postal is a politically incorrect movie, and also a politically incorrect game. I think if you have a game where you can use a cat as a silencer, you cannot make this as a serious movie. So it must be a funny movie. It should be an absurd comedy... So you see there is a difference between doing something professional, and only talking about it. And all that people there in the Internet, bashing or whatever, they cannot tell a fucking story for 5 minutes.

Uwe Boll
As you see, the reactions were really reserved from the studios...

Uwe Boll
House of the Dead 2 I gave away. Alone in the Dark 2 I will also not do; even if the DVD movie made money. BloodRayne 2 in the Wild West is what I really want to do.

Uwe Boll
I totally regret as a German what happened at this point of history. But when people ask me are you, as a German, feel responsible for the Holocaust? No, because I'm born 1965 and it would be completely un-logical to say I'm responsible, but as a country we are responsible.

Uwe Boll
Postal will be so politically incorrect and harsh, it's like a mirror to American society, and I don't think the movie will be well received by anybody. For example, Osama Bin Laden will be one of the lead characters—I think that shows the mood of the movie.

Uwe Boll
There are directors that make one good movie their whole life, but this movie creates a buzz around the director, then they get like forever good reviews. Till someone 20 years later says, look, to be honest I liked only the one movie of that guy. In my case it's exactly the opposite. I get trashed for whatever I do. They don't see any difference in what I'm doing.

Uwe Boll
We'll be sending a print to the MPAA, we say nothing about it and hope they sleep through the movie.

Uwe Boll
This day showed us that we are all completely voyeurs greedy for thrilling entertainment no matter if this is real or not. 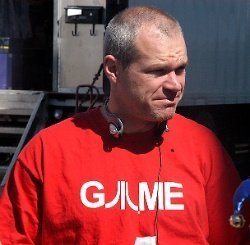 Creative Commons
Born: June 22, 1965 (age 57)
Bio: Dr. Uwe Boll is a German director, producer and screenwriter based in Canada, whose work includes several films adapted from video games. He finances his own films through his Boll and Event Film Productions production companies.
Known for: