The most remarkable thing about my mother is that for 30 years she served nothing but leftovers. The original meal was never found.

Tracey Ullman
Referring to the many different characters she plays: "It's very therapeutic, what I do. Other people get this anonymity and thrill from being in an Internet chat room, where they can be anybody they want to be. That's the feeling I get, but to an even greater extent. I physically take on these characteristics. Afterwards, I feel I'm a parrot. I need a black bag put over my head until I become myself again."

Tracey Ullman
As we twirled and snapped our fingers, I felt light and airy and fancy-free. Of course I did, I had no bloody panties on! And the cartwheel lift's coming up! And I'm a brunette!

Tracey Ullman
My mum went and married a really horrible horrible man, who drove a taxi at night and had a sticky-fingered son and he smoked cigars in the toilet. Smelled terrible! Again, there's no therapy, there's no counseling over the whole situation! Just married the maniac. And there was a new person in her bed now, and I couldn't do my nightly performance anymore. I was nine years old and my show had been canceled!

Tracey Ullman
People think I'm a demented little pixie but I'm not 'on' all the time. I'm sensible. I pay my bills. I've never done drugs. I don't drink or smoke. I eat organic. I'm a goody-goody, really, but I can play bad girls.

Tracey Ullman
They hold onto a small child who's hungry, then go back to their homes and feel good about themselves. That's how I perceive actors getting involved in politics and charities. They want even more attention for themselves, it's in their nature.

Tracey Ullman
I'd stand in front of the mirror and talk to myself until I fell asleep, you know. I'd interview myself as women with problems, you know, like, women in documentaries who had three kids and chainsmoked and husbands in prison that hit them! I'd be in the mirror going, [lowers voice] yeah well, you know, it's not easy since Derrin went into prison. My eyes aren't black anymore, but the twins, Tilly and Wayne, you know, they don't stop crying. SHUT UP TILLY SHUT UP TILLY!

Tracey Ullman
I was never a child. I was a menopausal woman within a child's body.

Tracey Ullman
Every character I do is based on someone I know. I try to justify every sketch we do. If it's not working, we find someone to talk to who it has happened to.

Tracey Ullman
I thought, is this what it's all about? Do you have to be blonde and girly and have freckles and a snub-nose and sort of act the coquette in show business? WELL YES!

Tracey Ullman
Why does everyone think the future is space helmets, silver foil, and talking like computers, like a bad episode of Star Trek? 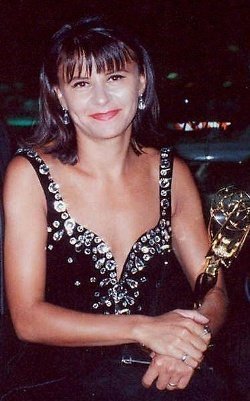 Creative Commons
Born: December 30, 1959 (age 62)
Bio: Tracey Ullman is an English television, stage, and film actress of dual British and American citizenship. She performs as a comedian, singer and dancer, and also works as a director, screenwriter, author, and businesswoman.
Known for: