The picture of modern philosophy as centered in epistemology and driven by the desire to ground our representations is so tenacious that some philosophers are prepared to bite the bullet and declare the effort simply wasted. Rorty, for example, finds it easier to reject modern philosophy altogether than to reject the standard accounts of its history. His narrative is more polemical than most, but it's a polemical version of the story told in most philosophy departments in the second half of the twentieth century. The story is one of tortuously decreasing interest. Philosophy, like some people, was prepared to accept boredom in exchange for certainty as it grew to middle age.

Susan Neiman
Any ethics that needs religion is bad ethics, and any religion that tries to do so is bad religion. Of course, there are plenty of both around.

Susan Neiman
However long Jewish, Christian and Muslim theologians struggle to find multiple meanings in this text, the dominant seems to be this: Abraham's unquestioning willingness to heed gods command to sacrifice the thing he loved most is what qualified him to become the father of what are called still the Abrahamic faiths.

Susan Neiman
Whatever else you may need to get clarity, you must start with open eyes.

Susan Neiman
Like many others, I came to philosophy to study matters of life and death, and was taught that professionalization required forgetting them. The more I learned, the more I grew convinced of the opposite: the history of philosophy was indeed animated by the questions that drew us there

Susan Neiman
I'm delighted to hear someone make the claim that there is moral progress because it can be such a incendiary thing to say, and its something that I say and deeply believe in.

Susan Neiman
Far less import than your belief of whether god exists is what you think your belief entails. Does it direct your behaviour by rules and commandments that are set out before you or does it require you to think them through yourself? Does it require you to try to make sense of the world, or does it give up on sense itself? And I think these are the crucial distinctions. Not whether you add belief in a god to them.

Susan Neiman
As long as your ideas of what's possible are limited by what's actual, no other idea has a chance.

Susan Neiman
We should be clear that neither genuine religious nor genuine moral impulses will ever be expressed in terms that tie the two essentially together. If you view religion as necessary for ethics, you've reduced us to the ethical level of 4 year olds. "If you follow these commandments you'll go to heaven, if you don't' you'll burn in hell" is just a spectacular version of the carrots and sticks with which you raise your children.

Susan Neiman
Those who cannot find [moral clarity] are likely to settle for the far more dangerous simplicity, or purity, instead.

Susan Neiman
One great function of the arts is to keep ideals alive in a culture that does not yet realize them.

Susan Neiman
You may substitute knowledge for superstition without satisfying the needs that drive people into superstition's arms. 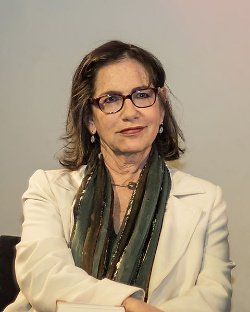 Creative Commons
Born: March 27, 1955 (age 66)
Bio: Susan Neiman is an American moral philosopher, cultural commentator, and essayist. She has written extensively on the juncture between Enlightenment moral philosophy, metaphysics, and politics, both for scholarly audiences and the general public.
Known for: