It is blood alone that can pay the price of freedom. Give me blood and I will give you freedom!

Subhas Chandra Bose
I have no doubt in my mind that our chief national problems relating to the eradication of poverty, illiteracy and disease and the scientific production and distribution can be tackled only along socialistic lines. The Very first thing that our future national government will have to do is to set up a commission for drawing up a comprehensive plan for reconstruction.

Subhas Chandra Bose
Comrades ! You have voluntarily accepted a mission that is the noblest that the human mind can conceive of. For the fulfillment of such a mission no sacrifice is too great, not even the sacrifice of one's life. You are today the custodians of India's national honour and the embodiment of India's hopes and aspirations. So conduct yourself that your countrymen may bless you and posterity may be proud of you.

Subhas Chandra Bose
To all of you I should like to say that in the course of this war you will have to acquire the experience and achieve the success which alone can build up a national tradition for our Army. An army that has no tradition of courage, fearlessness and invincibility cannot hold its own in a struggle with a powerful enemy.

Subhas Chandra Bose
India is calling. Blood is calling to blood. Get up, we have no time to lose. Take up your arms! we shall carve our way through the enemy's ranks, or if God wills, we shall die a martyr's death. And in our last sleep we shall kiss the road that will bring our Army to Delhi. The road to Delhi is the road to Freedom. Chalo Delhi (March to Delhi).

Subhas Chandra Bose
Forget not that the grossest crime is to compromise with injustice and wrong. Remember the eternal law: you must give, if you want to get.

Subhas Chandra Bose
It is our duty to pay for our liberty with our own blood. The freedom that we shall win through our sacrifice and exertions, we shall be able to preserve with our own strength.

Subhas Chandra Bose
As soldiers, you will always have to cherish and live up to the three ideals of faithfulness, duty and sacrifice. Soldiers who always remain faithful to their nation, who are always prepared to sacrifice their lives, are invincible. If you, too, want to be invincible, engrave these three ideals in the innermost core of your hearts.

Subhas Chandra Bose
Gird up your loins for the task that now lies ahead. I had asked you for men, money and materials. I have got them in generous measure. Now I demand more of you. Men, money and materials cannot by themselves bring victory or freedom. We must have the motive-power that will inspire us to brave deeds and heroic exploits.

Subhas Chandra Bose
The secret of political bargaining is to look more strong than what you really are.

Subhas Chandra Bose
Let me remind you that you have a two-fold task to perform. With the force of arms and at the cost of your blood you will have to win liberty. Then, when India is free, you will have to organize the permanent army of Free India, whose task it will be to preserve our liberty for all time. We must build up our national defense on such an unshakable foundation that never again in our history shall we lose our freedom.

Subhas Chandra Bose
It is only on the basis of undiluted Nationalism and of perfect justice and impartiality that the Indian Army of Liberation can be built up.

Subhas Chandra Bose
One individual may die for an idea, but that idea will, after his death, incarnate itself in a thousand lives.

Subhas Chandra Bose
Reality is, after all, too big for our frail understanding to fully comprehend. Nevertheless, we have to build our life on the theory which contains the maximum truth. We cannot sit still because we cannot, or do not, know the Absolute Truth.

I have no riches but my thoughts, Yet these are wealth enough for me.
Sara Teasdale 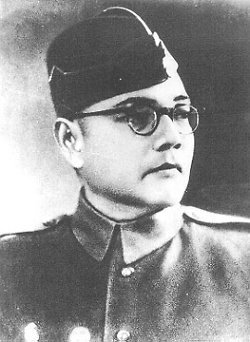 Creative Commons
Born: January 23, 1897
Died: August 18, 1945 (aged 48)
Bio: Subhas Chandra Bose was an Indian nationalist whose defiant patriotism made him a hero in India, but whose attempt during World War II to rid India of British rule with the help of Nazi Germany and Imperial Japan left a troubled legacy.
Known for: