I've only been in love with a beer bottle and a mirror.

Sid Vicious
I'm not chic, I could never be chic. I was in it from its inception.

Sid Vicious
I don't understand why people think it's so difficult to learn to play guitar. I found it incredibly easy. You just pick a chord, go twang, and you've got music.

Sid Vicious
American audiences are just the same as anybody else. Except a bit more boring.

Sid Vicious
We had a death pact. I have to keep my half of the bargain. Please bury me next to my baby in my leather jacket, jeans and motor cycle boots. Goodbye.

Sid Vicious
Well, you know, like, I don't really give a fuck what the general public think.

Sid Vicious
I'll probably die by the time I reach 25. But I'll have lived the way I wanted to.

Sid Vicious
All I did was cash in on the fact that I'm good-looking and I have a good figure and girls like me.

Sid Vicious
The band broke up because I couldn't bear Rotten anymore because he was an embarrassment with his silly hats and his, like, shabby, dirty, nasty looking appearance.

Sid Vicious
I'm not vicious really. I consider myself kind-hearted. I love my mum. 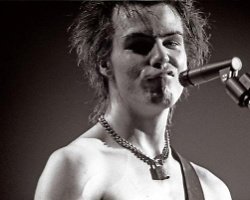 Creative Commons
Born: May 10, 1957
Died: February 2, 1979 (aged 21)
Bio: John Beverly, born John Simon Ritchie, later named Sid Vicious, was an English musician, most famous as the bass guitarist of the influential punk rock band the Sex Pistols, and notorious for his arrest for the alleged murder of his girlfriend, Nancy Spungen.