The time is past when music was written for a handful of aesthetes. Today vast crowds of people have come face to face with serious music and are waiting with eager impatience. Composers, take heed of this…But this does not mean that you must pander to this audience. Pandering always has an element of insincerity about it and nothing good ever came of that.

Sergei Prokofiev
It seemed to me that had Haydn lived to our day he would have retained his own style while accepting something of the new at the same time. That was the kind of symphony I wanted to write: a symphony in the classical style. And when I saw that my idea was beginning to work, I called it the Classical Symphony.

Sergei Prokofiev
In my view, the composer, just as the poet, the sculptor or the painter, is in duty bound to serve Man, the people. He must beautify human life and defend it. He must be a citizen first and foremost, so that his art might consciously extol human life and lead man to a radiant future. Such is the immutable code of art as I see it.

Sergei Prokofiev
My chief virtue (or if you like, defect) has been a tireless lifelong search for an original, individual musical idiom. I detest imitation, I detest hackneyed devices.

Sergei Prokofiev
This is my best work, but only because The Flaming Angel is my greatest. 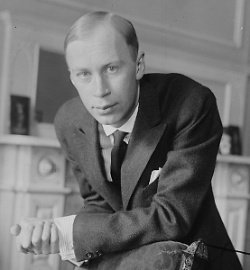 Creative Commons
Born: April 11, 1891
Died: March 5, 1953 (aged 61)
Bio: Sergei Sergeyevich Prokofiev was a Russian and Soviet composer, pianist and conductor. As the creator of acknowledged masterpieces across numerous musical genres, he is regarded as one of the major composers of the 20th century.
Known for: