You and your smarmy pundits — and the smarmy pundits you have in your pocket — can take your war and shove it. Let's unite not only in stopping this war, but in holding this administration accountable. Let's make this crystal clear: We do support our troops, but not the exploitation of them and their families. The money that's spent on this war would be better spent on building levees in New Orleans and health care in Africa and care for our veterans. Iraq is not our toilet. It's a country of human beings whose lives that were once oppressed by Saddam are now in Dante's Inferno.

Sean Penn
Every day, this elected leader is called a dictator here, and we just accept it, and accept it. And this is mainstream media. There should be a bar by which one goes to prison for these kinds of lies.

Sean Penn
When you have a precedent set like that, and you have somebody, George Tenet, acknowledging in his book that he knew that the administration was deceiving the American people into a situation that is murdering young men and women from this country and others, that George Tenet and Dick Cheney and Condoleezza Rice and George Bush, et al., should be in fucking jail. 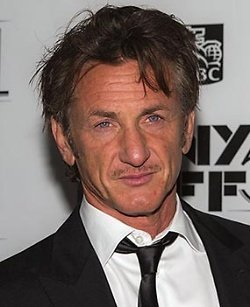 Creative Commons
Born: August 17, 1960 (age 61)
Bio: Sean Justin Penn is an American actor, filmmaker, and political activist. He has won two Academy Awards, for his roles in the mystery drama Mystic River and the biopic Milk.
Known for: