You can always spot a fool, for he is a man who will tell you he knows who is going to win an election.

Robert Harris
But clever people all make one mistake. They all think everyone else is stupid. And everyone isn't stupid. They just take a bit more time, that's all.

Robert Harris
What was leadership, after all, but the blind choice of one route over another and the confident pretense that the decision was based on reason?

Robert Harris
By dawn he had surrendered, gratefully, to the old inertia, the product of always seeing both sides of every question.

Robert Harris
Politics? Boring? Politics is history on the wing! What other sphere of human activity calls forth all that is most noble in men's souls, and all that is most base? Or has such excitement? Or more vividly exposes our strengths and weaknesses? Boring? You might as well say that life itself is boring!

Robert Harris
Nothing is more important to a nation than its history. It is the earth upon which any society stands.

Robert Harris
He felt more human with his boots on. A man can face the world with something on his feet.

Robert Harris
History is too important to be left to the historians.

Robert Harris
You can't make sense of the present unless a part of you lives in the past.

Robert Harris
Does a name stick because it suits a man or does the man, unconsciously, evolve into his name?

Robert Harris
His scars and his tattoos were the medals of his lifetime. He was proud to wear them.

Robert Harris
Down in the cellar the Gestapo were licensed to practice what the Ministry of Justice called 'heightened interrogation'. The rules had been drawn up by civilised men in warm offices and they stipulated the presence of a doctor.

Robert Harris
To say she was my girlfriend was absurd: no one the wrong side of thirty has a girlfriend… I suppose I ought to have realize it's ominous that forty thousand years of human language had failed to produce a word for our relationship.

Robert Harris
Heathrow the next morning looked like one of those bad science fiction movies "set in the near future" after the security forces have taken over the state. Two armored personnel carriers were parked outside the terminal. A dozen men with Rambo machine guns and bad haircuts patrolled outside. Vast lines of passengers queued to be frisked and X-rayed, carrying their shoes in one hand and their pathetic tolietries in a clear plastic bag in the other. Travel is sold as freedom, but we were free as lab rats. This is how they'll manage the next holocaust, I thought, as I shuffled forward in my stockinged feet: they'll simply issue us with air tickets and we'll do whatever we're told.

Robert Harris
The great western myth... That just because a place has a McDonalds and MTV and takes American Express it's exactly the same as everywhere else – it doesn't have a past any more, it's Year Zero.

Robert Harris
We believe in God, we believe in Germany which He created in His world, and in the Führer, Adolf Hitler, whom He has sent us.

Robert Harris
In Russia, the past carries razors and a pair of handcuffs.

Robert Harris
That young man seeks opportunities to test his principles as readily as a drunk picks fights in a bar.

Robert Harris
Another of Cicero's maxims was that if you must do something unpopular, you might as well do it wholeheartedly, for in politics there is no credit to be won by timidity.

Robert Harris
Travel is sold as freedom, but we were about as free as lab rats. This is how they'll manage the next Holocaust, I thought, as I shuffled forward in my stockinged feet: they'll simply issue us with air tickets and we'll do whatever we're told.

Robert Harris
A book unwritten is a delightful universe of infinite possibilities. Set down one word, however, and immediately it becomes earthbound. Set down one sentence and its halfway to being just like every other bloody book that's ever been written. But the best must never be allowed to drive out the good. In the absence of genius there is always craftsmanship. One can at least try to write something that will arrest the readers' attention, that will encourage them, after reading the first paragraph, to take a look at the second, and then the third.

Robert Harris
What a heap of ash most political careers amount to, when one really stops to consider them!

Robert Harris
Cicero smiled at us. 'The art of life is to deal with problems as they arise, rather than destroy one's spirit by worrying about them too far in advance. Especially tonight.' 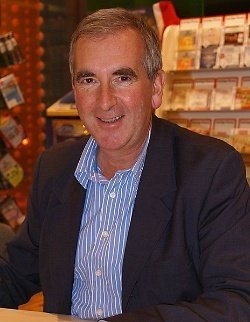 Creative Commons
Born: March 7, 1957 (age 63)
Bio: Robert Dennis Harris is an English novelist. He is a former journalist and BBC television reporter. Although he began his career in non-fiction, his fame rests upon his works of historical fiction.
Known for:
Most used words:
man, human, set, boring, feet, history, politics