Some people say, "New York's a great place to visit, but I wouldn't want to live there." I say that about other places.

Robert De Niro
When I'm directing a great dramatic scene, part of me is saying, "Thank God I don't have to do that." Because I know how fucking hard it is to act. It's the middle of the night. It's freezing. You gotta do this scene. You gotta get it up to get to that point. And yet, as a director, you've got to get the actors to that point. It's hard either way.

Robert De Niro
I like it when interviews are brief. Are we done yet?

Robert De Niro
As you get older, the more complicated things get. It's almost therapeutic to be doing simple things with the kids.

Robert De Niro
They're all animals anyway. All the criminals come out at night. Whores, skunk pussies, buggers, queens, fairies, dopers, junkies, sick, venal. Someday a real rain will come and wash all this scum off the streets.

Robert De Niro
I didn't have a problem with rejection, because when you go into an audition, you're rejected already. There are hundreds of other actors. You're behind the eight ball when you go in there.

Robert De Niro
Movies are hard work. The public doesn't see that. The critics don't see it. But they're a lot of work. A lot of work.

Robert De Niro
Better to be a king for a night than a schmuck for a lifetime.

Robert De Niro
There is a certain combination of anarchy and discipline in the way I work.

Robert De Niro
The hardest thing about being famous is that people are always nice to you. You're in a conversation and everybody's agreeing with what you're saying—even if you say something totally crazy. You need people who can tell you what you don't want to hear. 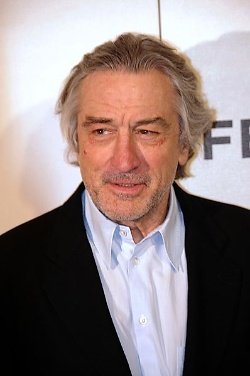 Creative Commons
Born: August 17, 1943 (age 78)
Bio: Robert De Niro is an American actor and producer who has starred in over 90 films. His first major film roles were in the sports drama Bang the Drum Slowly and Martin Scorsese's crime film Mean Streets.
Known for: