We, unlike Nazi Germany or Mussolini's Italy, have never stopped being a nation of laws, not of men. But witness how men with motives and a majority can manipulate law to cruel and unjust ends.

Robert Byrd
To engage in war is always to pick a wild card. And war must always be the last resort, not a first choice. I truly must question the judgment of any president who can say that a massive, unprovoked military attack on a nation which is over fifty percent children is 'in the highest moral traditions of our country.'

Robert Byrd
Hitler never abandoned the cloak of legality; he recognized the enormous psychological value of having the law on his side. Instead, he turned the law inside out and made illegality legal. 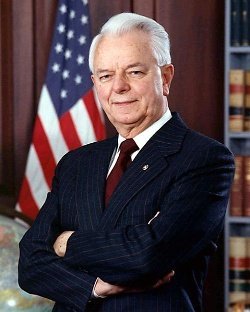