As a matter of general principle, I believe there can be no doubt that criticism in time of war is essential to the maintenance of any kind of democratic government … too many people desire to suppress criticism simply because they think that it will give some comfort to the enemy to know that there is such criticism. If that comfort makes the enemy feel better for a few moments, they are welcome to it as far as I am concerned, because the maintenance of the right of criticism in the long run will do the country maintaining it a great deal more good than it will do the enemy, and will prevent mistakes which might otherwise occur.

Robert A. Taft
About this whole judgment there is the spirit of vengeance, and vengeance is seldom justice. The hanging of the eleven men convicted will be a blot on the American record which we shall long regret 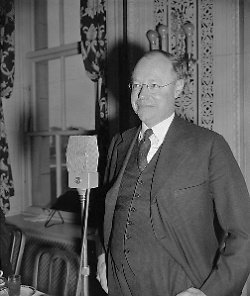 Creative Commons
Born: September 8, 1889
Died: July 31, 1953 (aged 63)
Bio: Robert Alphonso Taft, of the Taft political family of Ohio, was a United States Senator and sought to be the Presidential candidate of the Republican Party in 1940 and 1952. As a U.S. senator, he was given the nickname "Mr. Republican."