How could that have happened?... Even if it was a hand of God … I'd read – and I don't know how they know this – but in approximately 3000 BC there was a massive undersea volcano and earthquake, which created a tsunami wave that had to have been a couple of hundred feet high. Just off the heel of Italy. Diagonally across you're staring right up the mouth of the Nile, so I'm wondering if that had anything to do with that.

Ridley Scott
I'm really intrigued by those eternal questions of creation and belief and faith. I don't care who you are, it's what we all think about. It's in the back of all our minds.

Ridley Scott
I honestly wasn't paying attention in school when I was told the story of Moses. Some of the details of his life are extraordinary.

Ridley Scott
I watched Someone to Watch Over Me the other night. I thought it was a really good movie. It's a great movie.

Ridley Scott
Just stare up at the stars at night, and you'll have those corny thoughts like we all do. How can you look at the galaxy and not feel insignificant? How on earth can we be it? It doesn't make sense. … It doesn't matter how much faith you have or don't have. I just don't buy the idea that we're alone. There's got to be some form of life out there.

Ridley Scott
I think he writes the truth. Because life is like that most of the time in some shape or form, whether it's illness or the end of the world. Cormac's a writer's writer. You read his writing and think, I can do that, and then you sit down and try. And you try, dude.

Ridley Scott
Universe to me is, if you'd like, the final character. Your landscape in a western is one of the most important characters the film has. The best westerns are about man against his own landscape. I think people have lost the ability to do that.

Ridley Scott
I do despair. That's a heavy word, but picking up a newspaper every day, how can you not despair at what's happening in the world, and how we're represented as human beings? The disappointments and corruption are dismaying at every level. And the biggest source of evil is of course religion. … Can you think of a good one? A just and kind and tolerant religion? … Everyone is tearing each other apart in the name of their personal god. And the irony is, by definition, they're probably worshipping the same god. 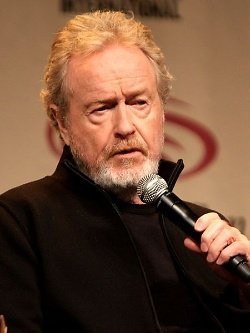