Terms are the tools of the teacher; and only an inferior hand persists in toiling with a clumsy instrument when a better one lies within his reach.

Richard Owen
In the endeavor to complete the Natural History of any class of animals, the mind seeks to penetrate the mystery of its origin, and by tracing its mutations in time past, to comprehend more clearly its actual condition, and gain an insight into its probable destiny in time to come.

Richard Owen
Homologue. The same organ in different animals under every variety of form and function.

Richard Owen
Paleontology further teaches, that not only the individual, but the species perishes; that as death is balanced by generation, so extinction has been concomitant with the creative power which has produced a succession of species; and furthermore, that, in this succession, there has been "an advance and progress in the main."

Richard Owen
A single substantive term is a better instrument of thought than a paraphrase.

Richard Owen
The laws of Coexistence;-the adaptation of structure to function; and to a certain extent the elucidation of natural affinities may be legitimately founded upon the examination of fully developed species;-But to obtain an insight into the laws of development,-the signification or bedeutung, of the parts of an animal body demands a patient examination of the successive stages of their development, in every group of Animals.

Richard Owen
The combination of such characters, some, as the sacral ones, altogether peculiar among Reptiles, others borrowed, as it were, from groups now distinct from each other, and all manifested by creatures far surpassing in size the largest of existing reptiles, will, it is presumed, be deemed sufficient ground for establishing a distinct tribe or sub-order of Saurian Reptiles, for which I would propose the name of Dinosauria. 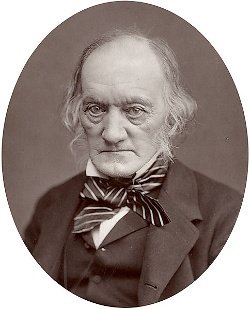 Creative Commons
Born: July 20, 1804
Died: December 18, 1892 (aged 88)
Bio: Sir Richard Owen was an English biologist, comparative anatomist and paleontologist. Despite being a controversial figure, Owen is generally considered to have been an outstanding naturalist with a remarkable gift for interpreting fossils.
Known for: