Stone walls do not a prison make,
Nor iron bars a cage;
Minds innocent and quiet take
That for an hermitage;
If I have freedom in my love,
And in my soul am free,
Angels alone that soar above
Enjoy such liberty.

Richard Lovelace
Yet this inconstancy is such
As you too shall adore;
I could not love thee, dear, so much,
Loved I not honor more.


Richard Lovelace
Then, if when I have lov'd my round,
Thou prov'st the pleasant she,
With spoils of meaner beauties crown'd
I laden will return to thee,
Ev'n sated with variety.


Richard Lovelace
Love, then unstinted, Love did sip,
And cherries plucked fresh from the lip;
On cheeks and roses free he fed;
Lasses like autumn plums did drop,
And lads indifferently did crop
A flower and a maidenhead.


Richard Lovelace
When flowing cups pass swiftly round
With no allaying Thames.

Richard Lovelace
If to be absent were to be
Away from thee;
Or that when I am gone,
You and I were alone;
Then, my Lucasta, might I crave
Pity from blust'ring wind, or swallowing wave.

Richard Lovelace
Oh, could you view the melody Of every grace And music of her face, You'd drop a tear; Seeing more harmony In her bright eye Than now you hear.

Richard Lovelace
When thirsty grief in wine we steep,
When healths and draughts go free,
Fishes, that tipple in the deep,
Know no such liberty.

Richard Lovelace
Then Love, I beg, when next thou takest thy bow,
Thy angry shafts, and dost heart-chasing go,
Pass rascal deer, strike me the largest doe.


Richard Lovelace
When I lie tangled in her hair,
And fettered to her eye,
The gods that wanton in the air
Know no such liberty.

Richard Lovelace
Here we'll strip and cool our fire
In cream below, in milk-baths higher;
And when all wells are drawn dry,
I'll drink a tear out of thine eye.

Richard Lovelace
Thou that swing'st upon the waving haire Of some well-filled Oaten Beard, Drunke ev'ry night with a Delicious teare, Dropt thee from Heav'n, where now th'art! The joys of Earth and Ayre are thine intire, That with thy feet and wings dost hop and flye; And when thy Poppy workes, thou dost retire To thy carv'd Acorn-bed to lye.

Richard Lovelace
I could not love thee, Dear, so much,
Loved I not honour more.

Richard Lovelace
Though Seas and Land betwixt us both,
Our Faith and Troth,
Like separated soules,
All time and space controules:
Above the highest sphere wee meet
Unseene, unknowne, and greet as Angels greet.

Richard Lovelace
Poor verdant fool, and now green ice! thy joys,
Large and as lasting as thy perch of grass,
Bid us lay in 'gainst winter rain, and poise
Their floods with an o'erflowing glass.

Richard Lovelace
When flowing cups run swiftly round With no allaying Thames.

Richard Lovelace
When Love with unconfined wings
Hovers within my gates.

Richard Lovelace
It is an item of faith that we are children of God; there is plenty of evidence in us against it. The faith that surmounts this evidence and that is able to warm itself at the fire of God's love, instead of having to steal love and self-acceptance from other sources, is actually the root of holiness.... We are not saved by the love we exercise, but by the love we trust.

Richard Lovelace
Tell me not, sweet, I am unkind,
That from the nunnery
Of thy chaste breast and quiet mind,
To war and arms I fly. 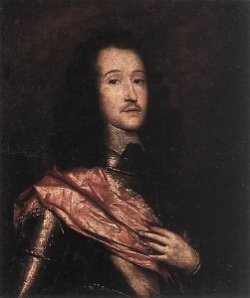 Creative Commons
Born: 1618
Died: 1657 (aged 39)
Bio: Richard Lovelace was an English poet in the seventeenth century. He was a cavalier poet who fought on behalf of the king during the Civil War. His best known works are "To Althea, from Prison," and "To Lucasta, Going to the Warres."
Known for:
Most used words:
love, liberty, eye, free, faith, round