To My Lord Nevill, in haste, My Lord Nevill, I recommend me to you as heartily as I can; and as ever ye love me and your own weal and security, and this realm, that ye come to me with that ye may take, defensibly arrayed, in all the haste that is possible, and that ye give credence to Richard Ratcliffe, this bearer, whom I now do send to you, instructed with all my mind and intent. And, my Lord, do me now good service, as ye have always before done, and I trust now so to remember you as shall be the making of you and yours. And God send you good fortunes. Written at London, 11th day of June, with the hand of your heartily loving cousin and master, R. Gloucester.

Richard III of England
We would most gladly ye came yourself if that ye may, and if ye may not, we pray you not to fail, but to accomplish in all diligence our said commandment, to send our Seal incontinent upon the sight hereof, as we trust you, with such as ye trust and the Officers pertaining to attend with it; praying you to ascertain us of your News. Here, loved be God, is all well and truly determined, and for to resist the Malice of him that had best Cause to be true, the Duke of Buckingham, the most untrue creature living; whom with God's Grace we shall not be long till that we will be in those parts, and subdue his Malice. We assure you there was never false traitor better purveyed for, as this bearer Gloucester shall show you. 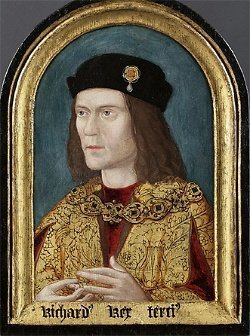