My heart has joined the Thousand, for my friend stopped running today.

Richard Adams
When the man was disgraced and told to go away, he was allowed to ask all the animals whether any of them would come with him and share his fortunes and his life. There were only two who agreed to come entirely of their own accord, and they were the dog and the cat. And ever since then, those two have been jealous of each other, and each is for ever trying to make man choose which one he likes best. Every man prefers one or the other.

Richard Adams
Bluebell had been saying that he knew the men hated us for raiding their crops and gardens, and Toadflax answered, 'That wasn't why they destroyed the warren. It was just because we were in their way. They killed us to suit themselves.

Richard Adams
Men will never rest till they've spoiled the earth and destroyed the animals.

Richard Adams
There is nothing that cuts you down to size like coming to some strange and marvelous place where no one even stops to notice that you stare about you.

Richard Adams
People who record birdsong generally do it very early-before six o'clock-if they can. Soon after that, the invasion of distant noise in most woodland becomes too constant and too loud.

Richard Adams
To come to the end of a time of anxiety and fear! To feel the cloud that hung over us lift and disperse - that cloud that dulled the heart and made happiness no more than a memory! This at least is one joy that must have been known by almost every living creature.

Richard Adams
Be cunning and full of tricks and your people shall never be destroyed.

Richard Adams
I have learned that with creatures one loves, suffering is not the only thing for which one may pity them. A rabbit who does not know when a gift has made him safe is poorer than a slug, even though he may think otherwise himself.

Richard Adams
If you want to bless me you can bless my bottom, for it is sticking out of the hole.

Richard Adams
Rabbits live close to death and when death comes closer than usual, thinking about survival leaves little room for anything else.

Richard Adams
They're all so much afraid of the Council that they're not afraid of anything else.

Richard Adams
Dangerous thing, a name. Someone might catch hold of you by it, mightn't they?

Richard Adams
Rabbits (says Mr. Lockley) are like human beings in many ways. One of these is certainly their staunch ability to withstand disaster and to let the stream of their life carry them along, past reaches of terror and loss. They have a certain quality which it would not be accurate to describe as callousness or indifference. It is, rather, a blessedly circumscribed imagination and an intuitive feeling that Life is Now.

Richard Adams
At that moment, in the sunset on Watership Down, there was offered to General Woundwort the opportunity to show whether he was really the leader of vision and genius which he believed himself to be, or whether he was no more than a tyrant with the courage and cunning of a pirate. For one beat of his pulse the lame rabbit's idea shone clearly before him. He grasped it and realized what it meant. The next, he had pushed it away from him.

Richard Adams
Like the pain of a bad wound, the effect of a deep shock takes some while to be felt. When a child is told, for the first time in his life, that a person he has known is dead, although he does not disbelieve it, he may well fail to comprehend it and later ask—perhaps more than once—where the dead person is and when he is coming back.

Richard Adams
The Threarah doesn't like anything he hasn't thought of for himself.

Richard Adams
If a rabbit gave advice and the advice wasn't accepted, he immediately forgot it, and so did everyone else.

Richard Adams
Rabbits need dignity and above all the will to accept their fate.

Richard Adams
Setting a 19th century prisoner free:
You have been acquitted by a Limerick jury, and you may now leave the dock without any other stain upon your character.

Richard Adams
You know how you let yourself think that everything will be all right if you can only get to a certain place or do a certain thing. But when you get there you find it's not that simple. 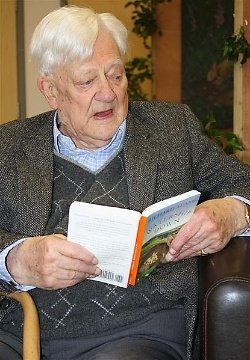 Creative Commons
Born: May 9, 1920
Died: December 24, 2016 (aged 96)
Bio: Richard George Adams was an English novelist who is known as the author of Watership Down, Shardik and The Plague Dogs. He studied modern history at university before serving in the British Army during World War II.
Known for: