If you want to get across an idea, wrap it up in a person.

Ralph Bunche
There is the ever-present, simple, but stark truth that though the peoples long primarily for peace, they may be prodded by their leaders and governments into needless war, which may at worst destroy them, at best lead them once again to barbarism

Ralph Bunche
To suggest that war can prevent war is a base play on words and a despicable form of warmongering. The objective of any who sincerely believe in peace clearly must be to exhaust every honorable recourse in the effort to save the peace. The world has had ample evidence that war begets only conditions which beget further war.

Ralph Bunche
May there be freedom, equality and brotherhood among all men. May there be morality in the relations among nations. May there be, in our time, at long last, a world at peace in which we, the people, may for once begin to make full use of the great good that is in us.

Ralph Bunche
With nationalism per se there maybe no quarrel. But narrow, exclusively self-centered nationalism persists as the outstanding dynamic of world politics and is the prime obstacle to enduring peace. 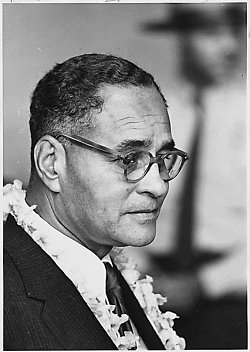 Creative Commons
Born: August 7, 1903
Died: December 9, 1971 (aged 68)
Bio: Ralph Johnson Bunche was an American political scientist, academic, and diplomat who received the 1950 Nobel Peace Prize for his late 1940s mediation in Israel. He was the first African American to be so honored in the history of the prize.
Known for: