That is not with me. It is up to the directors to give me roles that might fetch awards.

Rajinikanth
That's what happened in our career. He never let me fall. In 1983, when I wanted to leave everything behind, it was Kamal Haasan who cajoled me back to the material world.

Rajinikanth
Yes, upon seeing some people during my visits to the Himalayas. They seem to have an inner peace and tranquility that we do not.

Rajinikanth
I have a brother in Bangalore. SP is my brother in Chennai.

Rajinikanth
Lee Kuan Yew of Singapore, he has overseen the development of that city

Rajinikanth
I cannot be an ordinary man, move around like people do, go out eat in a restaurant or take a walk. Perhaps, this is what I have lost.

Rajinikanth
Sir, in K. Balachander's unit, the dialogue for an entire film was only this much. 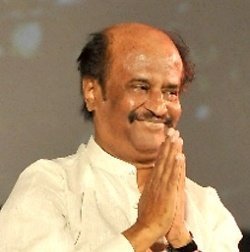