This entire opus is respectfully dedicated to all those who have loved unconditionally only to have their hearts unanaesthetically ripped out: Base not your joy on the deeds of others, for what is given can be taken away. No hope = No fear.

Peter Steele
It's a funny thing, when you talk to God, you're religious, but when he talks to you, you're a psychopath.

Peter Steele
Some people say I'm a pussy. I say, you are what you eat.

Peter Steele
I left the stage because I thought I had to shit, but then I lost the feeling.

Peter Steele
This next song is called 'Wolf Moon' [crowd starts to cheer]. Wait with cheering until you hear what the song's about. It's about a guy who turns into a werewolf when he engages in oral sex with a menstruating woman [crowd cheers even louder, and Steele spreads out his arms]. You wanna call me a pussy? You are what you eat. 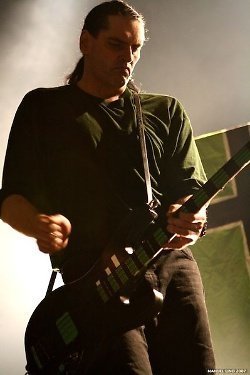