There is nothing physical to be learned a priori. We have no right whatever to ascertain a single physical truth without seeking for it physically, unless it be a necessary consequence of other truths already acquired by experiment, in which case mathematical reasoning is alone requisite.

Peter Guthrie Tait
It is only in "tall talk"(or in advertisements) that any human preparation, elementary or not, can be spoken of as chemisch rein.

Peter Guthrie Tait
Oh, that's nothing – I could coach a coal scuttle to be Senior Wrangler.

Peter Guthrie Tait
From the earliest times man's apprehension of the causes and connections of natural phenomena has been rendered uncertain and imperfect by his wilfully ignoring the great fact that Natural Philosophy is an experimental, and not an intuitive, science.

Peter Guthrie Tait
The next grand extensions of mathematical physics will, in all likelihood, be furnished by quaternions.

Peter Guthrie Tait
To [the scientific man] the discovery of a new law of nature, or even of a new experimental fact, or the invention of a novel mathematical method, no matter who has been the first to reach it, is an event of an order altogether different from, and higher than, those which are so profusely chronicled in the newspapers.

Peter Guthrie Tait
An exact or adequate conception of matter itself, could we obtain it, would almost certainly be something extremely unlike any conception of it which our senses and our reason will ever enable us to form.... The discovery of the ultimate nature of matter is probably beyond the range of human intelligence.

Peter Guthrie Tait
Nothing is so preposterously unscientific than to assert, that with the utmost strides attempted by science we should necessarily be sensibly nearer to a conception of the ultimate nature of matter.

Peter Guthrie Tait
[Examiners] spend their lives in discovering which pages of a text-book a man ought to read and which will not be likely to 'pay'.

Peter Guthrie Tait
Perhaps to the student there is no part of elementary mathematics so repulsive as is spherical trigonometry.

Peter Guthrie Tait
It a duty to bring forward the claims of a true prophet, be his nationality what it may; if these have suffered from his own modesty or carelessness, or from the neglect or disparagement of others.

Peter Guthrie Tait
In considering what may be designated as 'Recent Advances in Physical Science,' it is well to remember that many things which have become almost popularly Si known within the last twenty-five years are much older in the minds and writings of the foremost scientific men.

Peter Guthrie Tait
Nothing is without its use in this world, though it may occasionally be difficult to discover that use.

Peter Guthrie Tait
Everything cosmical must be gradually decaying.

Peter Guthrie Tait
There is a necessity for perfect definiteness of language in all truly Scientific work. 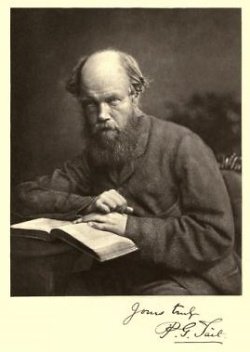 Creative Commons
Born: April 28, 1831
Died: July 4, 1901 (aged 70)
Bio: Peter Guthrie Tait was a Scottish mathematical physicist, best known for the mathematical physics textbook Treatise on Natural Philosophy, which he co-wrote with Kelvin, and his early investigations into knot theory, which contributed to the eventual formation of topology as a mathematical discipline. His name is known in graph theory mainly for Tait's conjecture.
Known for: