Mr. Chairman, delegates, and fellow citizens: I am honored by the support of this convention for vice president of the United States. I accept the duty to help lead our nation out of a jobs crisis and back to prosperity — and I know we can do this. I accept the calling of my generation to give our children the America that was given to us, with opportunity for the young and security for the old — and I know that we are ready. Our nominee is sure ready. His whole life has prepared him for this moment — to meet serious challenges in a serious way, without excuses and idle words. After four years of getting the run-around, America needs a turnaround, and the man for the job is Governor Mitt Romney.

Paul Ryan
Now it's a war on women; tomorrow it's going to be a war on left-handed Irishmen or something like that.

Paul Ryan
This whole thing is a big gamble, but it's probably the best gamble to take before throwing in the towel and allowing sectarian genocide to take over. I personally give this three to six months to find out.

Paul Ryan
Child support should do just that – support children, not the federal government.

Paul Ryan
Working together, America's military, Iraqi security forces and the Iraqi people have won a major battle in the war on terrorism.

Paul Ryan
Josh Smith: But specifically where you stand when it comes to rape, and should it be legal for a woman to get an abortion if she's —
Paul Ryan: Yeah, well, so I'm very proud of my pro-life record, and I've always adopted the idea — the position that the method of conception doesn't change the definition of life.

Paul Ryan
But the reason I got involved in public service, by and large, if I had to credit one thinker, one person, it would be Ayn Rand. And the fight we are in here, make no mistake about it, is a fight of individualism versus collectivism.

Paul Ryan
This law, by and large, extends the same kind of crime-fighting tools we apply to gangs and mobsters to terrorists. That's not something that is an infringement of our civil liberties. 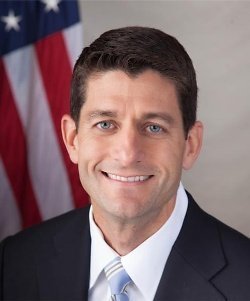 Creative Commons
Born: January 29, 1970 (age 51)
Bio: Paul Davis Ryan is an American politician who served as the 54th speaker of the United States House of Representatives from October 2015 to January 2019. He was also the 2012 vice presidential nominee of the Republican Party, running unsuccessfully alongside Mitt Romney.