Not to return to the old … can be the task of our time, but to clothe the spirit of Christianity, its religious-ethical principle, which lay as a compelling force at the basis of all preceding developments, in the fitting and intelligible form for our age.

Otto Pfleiderer
The religious principle of Jesus was thus certainly freed by Paul from its original Jewish and national husk, but only to be immediately clothed again in a new supernaturalistic envelope, the origin of which likewise lay in the historically given ideas of Hellenism and Pharisaism. Therefore the Pauline Christ can just as little be for us a binding object of faith as the Jesus of history.

Otto Pfleiderer
Paul abstracted this universal principle from the concrete phenomenon in the man Jesus, in whom it was interlaced with Jewish presuppositions and strivings, which as such would have been a hindrance to the universal and abiding effectiveness of that principle.

Otto Pfleiderer
The divine in Jesus does not denote a violent rupture of the course of human history with the exclusion of all causal connection and all human personality, but it lies at the basis of all this history from beginning to end; it dwells in it as the divine Logos, as the rational aptitude of human nature, as impulse to the true and good, as God-consciousness. All progress in the development of mankind from the lowest grades upward, every achievement of culture which makes rude nature the servant of reason, every formation of higher ethical ideals, and every clarifying and deepening of the God-consciousness, is an effect and a revelation of the divine Logos dwelling in our race.

Otto Pfleiderer
Here is the basis of the modern critical biblical science, which treats the documents of Christianity and Judaism according to the same principles of historical investigation which are valid in all other historical domains, particularly in that of the history of the ethnic religions.

Otto Pfleiderer
What has here been remarked in general of the prophets as the champions of religious progress is also true in particular of him who as the most perfect blossom of the religious development of Israel constituted also the essential force of the new Christian religion—Jesus of Nazareth. Against this logical conclusion of the evolutionary view of history the representatives of the new faith present the most obstinate resistance.

Otto Pfleiderer
It is a hyperbole excusable in poetic language, but not scientifically valid, when he [Jesus] is identified with the ideal of humanity. The ideal is the unconditioned, the absolute, but every phenomenon in time and space is conditioned and limited, and cannot therefore coincide with the ideal. This hyperbole of pious faith may grow out of noble feelings, but for all that it remains essentially false, and is harmful when seriously regarded as dogma. 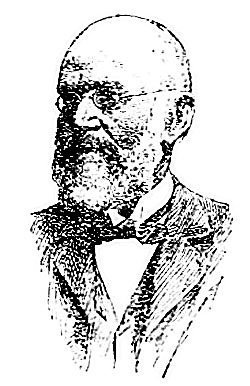 Creative Commons
Born: September 1, 1839
Died: July 18, 1908 (aged 68)
Bio: Otto Pfleiderer was a German Protestant theologian. Through his writings and his lectures, he became known as one of the most influential representatives of liberal theology.
Known for: