Making Donkey Punch was all about energy, speed and intense work.

Olly Blackburn
And for the genre stuff I'm a big fan of Carpenter, Romero, Peckinpah, and Polanski, because they're unremitting and real and brilliant at showing characters under unbearable stress and unafraid of challenging us with uncomfortable truths as well as being just incredible filmmakers.

Olly Blackburn
The pure emotion, from a very early age, of seeing a film and feeling it take you over like a high... At first it was all the things I loved as a kid — James Bond films and Spaghetti Westerns and things like that (which I still love). Then I started discovering the masters and finding out which films spoke to me and when they did — the total immersion, the experience of being taking to another world for a couple of hours, opening your mind to new things and ideas on such an emotional level. How could you not fall in love with that?

Olly Blackburn
I knew we needed brave actors - the story called for scenes that might be frightening to some - and we needed it to be real and believable.

Olly Blackburn
The film is about what happens when real people do ghastly things to each other, and sure, it shows those things because that's the tone of the film — fairly realistic.

Olly Blackburn
Donkey Punch is a very extreme, real-world thriller – it's about characters and events that are based in reality and it pushes them into very dark and extreme situations where they have to do things that they would never have imagined. The film shows all this quite realistically and doesn't pull its punches.

Olly Blackburn
I suppose my mega heroes are the films of Michael Powell and Sam Peckinpah. I would have loved to have looked over their shoulder. I'm a bit of a cinephile. I love cinema. It's an amazing medium. I can go and watch anything from very, very arty films to huge Hollywood spectaculars and everything in between.

Olly Blackburn
No one is evil, they just make very bad decisions. And no one has super powers, they only have their street smarts.

Olly Blackburn
I've directed a fair amount of stuff in the past, such as music videos, commercials and short films and I believe that the best way to learn in this industry – I mean, you can go to film school and that's good – but ultimately, the only way you're ever going to learn is through raw experience.

Olly Blackburn
I love films, I eat, sleep and drink them, and genre definitely had a huge impact.

Olly Blackburn
I think Donkey Punch is an extreme thriller or an extreme reality-based thriller. The whole point of the film is it's grounded in reality.

Olly Blackburn
Nic Roeg inspires me. He's one of the greatest British film directors. His work is bold, challenging, cinematic and full of mesmerising ideas.

Olly Blackburn
Dawn of the Dead is one of the most prophetic and disturbing films you'll see, and I challenge you to find anyone who can find another film from that era which provides the same level of social commentary.

Olly Blackburn
The core idea was to be as realistic as possible and we wanted people to identify with the characters.

Olly Blackburn
I think when you're shooting on such a tight budget and schedule, the insanity and the energy and the sense of spirit is what makes the experience unique. Ten percent more isn't going to make enough of a difference and anything that would — double the budget, triple the time — then you're making a different kind of film. 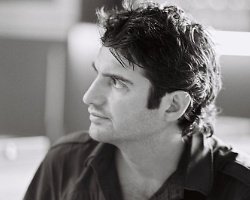 Creative Commons
Bio: Olly Blackburn is a film director and screenwriter. Born in London, England, Blackburn had an acting role in the 1982 short comedy film A Shocking Accident; the film won an Academy Award in 1983 for Best Short Subject.
Known for: