Moshe Dayan
We don't have a solution, and you will continue living like dogs, and whoever wants will go, and will see how this procedure will work out. For now, it works out. Let's say the truth. We want peace. If there is no peace, we will maintain military rule and we will have four to five military compounds on the mountains, and they will sit ten years under the Israeli military regime.

Moshe Dayan
It is not in our hands to prevent the murder of workers… and families… but it is in our hands to fix a high price for our blood, so high that the Arab community and the Arab military forces will not be willing to pay it.

Moshe Dayan
In two cases I did not fulfill my role as defense minister, in that I did not stop things that I was sure should have been stopped.

Moshe Dayan
War is the most exciting and dramatic thing in life. In fighting to the death you feel terribly relaxed when you manage to come through.

Moshe Dayan
All that is required is to find an officer, even a captain would do, to win his heart or buy him with money to get him to agreed to declare himself the savior of the Maronite population. Then the Israeli army will enter Lebanon, occupy the necessary territory, create a Christian regime that will ally itself with Israel. The territory from Litani southward will be totally annexed to Israel, and everything will fall into place.

Moshe Dayan
Along the Syria border there were no farms and no refugee camps — there was only the Syrian army... The kibbutzim saw the good agricultural land … and they dreamed about it... They didn't even try to hide their greed for the land... We would send a tractor to plow some area where it wasn't possible to do anything, in the demilitarized area, and knew in advance that the Syrians would start to shoot. If they didn't shoot, we would tell the tractor to advance further, until in the end the Syrians would get annoyed and shoot. And then we would use artillery and later the air force also, and that's how it was... The Syrians, on the fourth day of the war, were not a threat to us.

Moshe Dayan
The only method that proved effective, not justified or moral but effective, when Arabs plant mines on our side [is retaliation]. If we try to search for the [particular] Arab [who planted mines], it has not value. But if we harass the nearby village... then the population there comes out against the [infiltrators]... and the Egyptian Government and the Transjordanian Government are [driven] to prevent such incidents, because their prestige is [assailed], as the Jews have opened fire, and they are unready to begin a war... the method of collective punishment so far has proved effective.

Moshe Dayan
A new State of Israel with broad frontiers, strong and solid, with the authority of the Israel Government extending from the Jordan to the Suez Canal.

Moshe Dayan
We could not guard every water pipeline from being blown up and every tree from being uprooted. We could not prevent every murder of a worker in an orchard or a family in their beds. But it was in our power to set high price for our blood, a price too high for the Arab community, the Arab army, or the Arab governments to think it worth paying... It was in our power to cause the Arab governments to renounce 'the policy of strength' toward Israel by turning it into a demonstration of weakness. 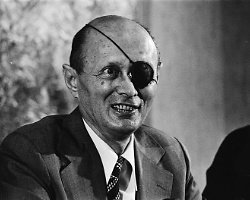 Creative Commons
Born: May 20, 1915
Died: October 16, 1981 (aged 66)
Bio: Moshe Dayan was an Israeli military leader and politician. He was the second child born on the first kibbutz, but he moved with his family in 1921, and he grew up on a moshav.
Known for: