So many things that seemed crucial and excruciatingly hard ended and then didn't matter anymore, forever after

Mona Simpson
Everybody in America grew up without a father even if they had one. It was the fifties. They were working.

Mona Simpson
Sometimes, a stage curtain parts and you see: life could be better if you had more. Usually, I think, we can get just as good a different way. But tricks, they do not always work.

Mona Simpson
In every person's face, there is one place that seems to express them most accurately. With my grandmother, you always looked at her mouth. 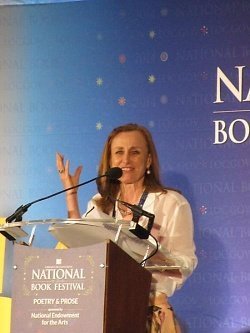 Born: June 14, 1957 (age 65)
Bio: Mona Elizabeth Simpson is an American novelist. She has written six novels and is a professor of English at the University of California, Los Angeles and the Sadie Samuelson Levy Professor in Languages and Literature at Bard College.
Known for: