I got one entire song from fortune cookies (Land of Sunshine). On another one, I took words from different Frank Sinatra songs and pasted them together. Another one, I was just driving around and there was a piece of paper on the ground, so I stole it.

Mike Patton
Trey Spruance didn't want to tour for ages. And Dean Menta has always been our guitar-roadie during Angel Dust, and I remember him playing fantastically during soundchecks. During each gig, he was watching from the side of the stage, seeing Big Jim play stuff that he could play better.

Mike Patton
We just wanna be the happy bums that we are. That's all.

Mike Patton
Revenge is good. I think revenge is healthy too, and if you can use music in that way, a sort of therapeutic way for yourself, it can't do any harm. So if King (For A Day... Fool For A Lifetime) is angry in any way, it's angry in a random, chaotic, healthy way. Like the guy who goes into a building, shoots a bunch of holes in the wall and then leaves. He didn't kill anybody.

Mike Patton
Recently, a girl chained herself to me with hand-cuffs after a gig, just because I refused to talk to her. I politely declined, though. I am a well-bred boy. I don't want to be too specific, but... it got pretty ugly.

Mike Patton
Puffy's the only guy who's jealous. All drummers want to be singers. I think it's a myth that the singer needs to be the focus. Bands perpetuate that myth. With somebody like Sebastian Bach it makes sense. Look at him. He could be in an Avon ad.

Mike Patton
It's (RV) about a slob sitting around who doesn't do anything. I kind of identify with it.

Mike Patton
Oh, have you seen Beavis and Butt-Head when they watch one of our videos and Beavis goes: 'These guys sound just like the Chili Peppers?' As if I haven't heard that one before!

Mike Patton
Big Jim is over and out, as far as I am concerned.

Mike Patton
Despite the aural onslaught, King (For A Day) is not an assault I think it's us being us, more than anything. I think we finally had the resources to be us on this record. 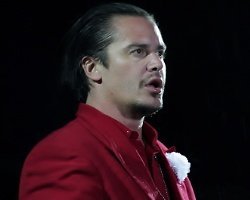