I don't want to be considered a hero. Imagine young people would grow up with the feeling that you have to be a hero to do your human duty. I am afraid nobody would ever help other people, because who is a hero? I was not. I was just an ordinary housewife and secretary.

Miep Gies
I myself am just an ordinary woman. I simply had no choice.

Miep Gies
I have never wanted special attention. I was only willing to do what was asked of me and what seemed necessary at the time. 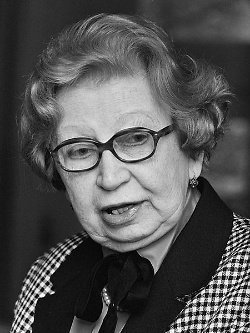 Creative Commons
Born: February 15, 1909
Died: January 11, 2010 (aged 100)
Bio: Hermine Santruschitz, better known as Miep Gies, was one of the Dutch citizens who hid Anne Frank, her family and four other Jews from the Nazis in an annex above Anne's father's business premises during World War II.