It is incumbent upon us to understand our greatness and believe in it so that we do not cheapen and profane ourselves.

Meir Kahane
There is the illusion of the world and the reality of the Torah.

Meir Kahane
Every man judges his own happiness and satisfaction with life in terms of his possession or lack of possession of those things that he considers worthwhile and valuable.

Meir Kahane
The banding together by the nations of the world against Israel is the guarantee that their time of destruction is near and the final redemption of the Jew at hand.

Meir Kahane
The Jew is upset because the nations of the world - the United Nations - lash him, brand him as racist and evil, hate him and openly demonstrate their desire to destroy him.

Meir Kahane
The poor Palestinians who today kill Jews with explosives and firebombs and stones are part of the same people who when they had all the territories they now demand be given to them for their state -attempted to drive the Jewish state into the sea.

Meir Kahane
There is no greater anti-Semite that the Jewish one, and none hates the Jewish people more than the Jewish traitor and apostate.

Meir Kahane
The observant Jew has his own sense of values. Torah Judaism is his blueprint for this life, his target for existence.

Meir Kahane
The Jewish nation is indeed, the heart of the world and there is no reason for the existence of empires, kings, rulers, masses or systems aside from their reaction to the Jewish people. 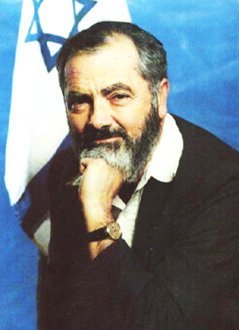