The Slavs are to work for us. Insofar as we do not need them, they may die. Therefore, compulsory vaccination and German health service are superfluous. The fertility of the Slavs is undesirable. They may use contraceptives or practice abortion, the more the better. Education is dangerous. It is enough if they can count up to one hundred. At best an education which produces useful coolies for us is admissible. Every educated person is a future enemy.

Martin Bormann
Films and gramophone records, music, books and buildings show clearly how vigorously a man's life and work go on after his death, whether we feel it or not, whether we are aware of the individual names or not. There is no such thing as death according to our view!

Martin Bormann
My darling girl, Unfortunately this earth is not a fairy-land, but a struggle for life, perfectly natural and therefore extremely harsh. All the same, or precisely for this reason, it is happiness and comfort for us men to have a precious sweetheart - and I have the most precious, the dearest and best of all! 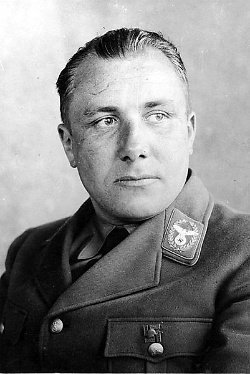 Creative Commons
Born: June 17, 1900
Died: May 2, 1945 (aged 44)
Bio: Martin Bormann was a prominent official in Nazi Germany as head of the Parteikanzlei. He gained immense power within the Third Reich by using his position as Adolf Hitler's private secretary to control the flow of information and access to Hitler.