Having seen the Red Army and Russian diplomacy in action, my own belief is that there is nothing the Soviets would not do to achieve world domination. But I am convinced that also that they respect force; perhaps they respect nothing in the world except force. And when confronted with strength and determination, they stop, look, and listen.

Mark W. Clark
I consider the South Koreans one of our greatest allies, a people who know communism and hate it and are not afraid to die fighting it.

Mark W. Clark
To Renie, my five-star wife- who for thirty years has inspired me to do my utmost in the service of my country. To her love, courage, sacrifices, understanding and guidance I attribute whatever success I may have achieved.

Mark W. Clark
The ROK Army military schools system was patterned exactly after ours, as was their naval training system. The ROKs during the war developed a Korean West Point and a Korean Annapolis. They created their own war college to give their officers more education as they showed capacity for higher command. All the senior instructors and most of the junior instructors have been through our schools as well as their own. They taught by our American methods, with our American weapons and from translated versions of our American military texts and manuals.

Mark W. Clark
Korea was my first experience of fighting a shooting war and a conference table war at the same time. But I had two years of head-knocking with the Russians to teach me what it is that the Communists respect: FORCE.

Mark W. Clark
On Memorial Day we visited the American cemetery at Anzio and saw the curving rows of white crosses that spoke eloquently of the price that America and her Allies had paid for the liberation of Italy. If ever proof were needed that we fought for a cause and not for conquest, it could be found in these cemeteries. Here was our only conquest: all we asked of Italy was enough of her soil in which to bury our gallant dead.

Mark W. Clark
My doubts were based on my conviction that the Communist enemy is a voracious beast. The more he is given, the hungrier he becomes. And as long as we of the free nations continue to lead from fear, to react from fright, he will be a well-fed enemy.

Mark W. Clark
World War II was an era in which America came of age as a world power. We had and we still have many lessons to learn. It was not surprising, perhaps, that we celebrated a victory when in reality we had not won the war. We had stopped too soon. We had been too eager to go home. We welcomed the peace, but after more years of effort and expenditure we found that we had won no peace.

Mark W. Clark
But the foundation of ROK military power was the South Korean infantryman, courageous, tireless, hungry for the knowledge that would give him more power as a fighting man, disciplined and willing to die in the service of the cause for which his country fought and bled. You didn't have to tell a South Korean that communism was evil. It was an evil that had blighted his country and he saw it all around him, wherever he went.

Mark W. Clark
I remember an incident when, as Chief of Army Field Forces, I went to Fort Benning, Georgia, to watch the instruction of the first class of Korean officers sent to America. I have seen a lot of training in my years of experience in the Army, but never had I seen more attentive concentration on the instructor. Not a Korean shifted his eyes from the instructor once during the session. It appeared to me that each Korean officer felt that in some way the mere physical process of unbroken sight of the instructor would speed the process by which he learned from the American teacher.

Mark W. Clark
In the Italian campaign we had demonstrated as never before how a polyglot army could be welded into a team of allies with the strength and unity and determination to prevail over formidable odds. But in Austria and elsewhere in postwar Europe, we had learned another lesson about allies. The Russians were not interested in teamwork. They wanted to keep things boiling. They were ready to resort to lying, to betrayal, to the repudiation of solemn pledges. They were accustomed to the use of Force. They were skilled in exploiting any sign of weakness or uncertainty or appeasement. This was their national policy.

Mark W. Clark
Our difficulties with the Russians increased, but I never really blamed Konev. He obviously was merely carrying out instructions. He even had a sense of humor about it occasionally. Once when we were discussing Austrian politics, the name of the Communist party leader, Ernst Fischer, was mentioned. Jokingly, I said: "Well, I don't like him because he is a Communist." Konev grunted. "That's fine," he said. "I don't like him either because he's an Austrian Communist."

Mark W. Clark
Once I said to Konev, "You've made ten demands at this Council meeting that we can't meet. But suppose I should say, 'All right. We agree to all ten demands.' Then what would you do?" "Tomorrow," he said, "I'd have ten new ones."

Mark W. Clark
This book is dedicated to the men and women of many nationalities who fought and died serving with the Fifth Army and the 15th Army Group in Italy. Never did a commander have more to be proud of than I in being associated with these selfless individuals.

Mark W. Clark
I emphatically disagree with statements of so-called military experts that victory was ours for the taking at any time during my period of command with the limited forces at our disposal and without widening the scope of the conflict. Korea's mountainous terrain literally soaks up infantry. We never had enough men, whereas the enemy not only had sufficient manpower to block our offensives, but could make and hold small gains of his own. 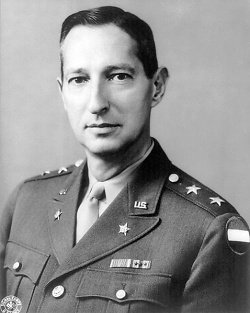