Mother considered a press conference on a par with a visit to a cage of cobras.

Margaret Truman
As a family, we had a code, which was to do the right thing, do it the best we could, never complain and never take advantage.

Margaret Truman
Courage is rarely reckless or foolish,... courage usually involves a highly realistic estimate of the odds that must be faced.

Margaret Truman
No matter how different our First Ladies have been — and as individual women they have ranged from recluses to vibrant hostesses to political manipulators on a par with Machiavelli — they have all shared the unnerving experience of facing a job they did not choose.

Margaret Truman
The men who espoused unpopular causes may have been considered misguided, but they were rarely attacked for their morals or their masculinity. Women who did the same thing were apt to be denounced as harlots or condemned for being unfeminine — an all-purpose word that was used to describe almost any category of female behavior of which men disapproved.

Margaret Truman
I love books. I really, really love them. There's something special about bringing people and books together.

Margaret Truman
First ladies are doing a lot. But the job remains undefined, frequently misunderstood, and subject to political attacks far nastier in some ways than those any President has ever faced. 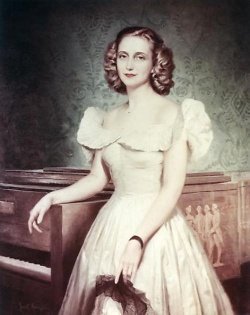 Creative Commons
Born: February 17, 1924
Died: January 29, 2008 (aged 83)
Bio: Mary Margaret Truman Daniel, also known as Margaret Truman or Margaret Daniel, was an American singer who later became the successful author of a series of murder mysteries and a number of works on U.S.
Known for: