The double jeopardy of being black and female in a racist and sexist society may well make one less afraid of the sanctions against success. A non-subservient black woman is by definition a transgressive- she is the ultimate outsider. 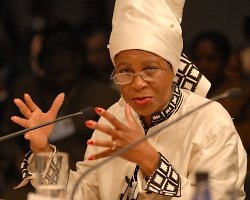 Creative Commons
Born: December 28, 1947 (age 73)
Bio: Mamphela Aletta Ramphele is a South African politician, a former activist against apartheid, a medical doctor, an academic and businesswoman. She was a partner of anti-apartheid activist Steve Biko, with whom she had two children.
Known for: