The secret of staying young is to live honestly, eat slowly, and lie about your age.

Lucille Ball
One of the things I learned the hard way was that it doesn't pay to get discouraged. Keeping busy and making optimism a way of life can restore your faith in yourself.

Lucille Ball
There's a great deal of difference between temperament and temper. Temperament is something you welcome creatively, for it is based on sensitivity, empathy, awareness... but a bad temper takes too much out of you and doesn't really accomplish anything.

Lucille Ball
A man who correctly guesses a woman's age may be smart, but he's not very bright.

Lucille Ball
I cured myself of my shyness when it finally occurred to me that people didn't think about me nearly as much as I gave them credit for. The truth was, nobody really gave a damn.

Lucille Ball
You see much more of your children once they leave home.

Lucille Ball
I believe that we're as happy in life as we make up our minds to be.

Lucille Ball
Remember to recognize the small successes that you will have. Don't let the brightness of that big goal blind you to what happens on the way toward the goal. Meet one wave at a time and enjoy what progress you make. I want you please not to be taken up in the undertow of pessimism.

Lucille Ball
I don't know anything about luck. I've never banked on it, and I'm afraid of people who do. Luck to me is something else: hard work - and realizing what is opportunity and what isn't.

Lucille Ball
I believe a woman's place is in the home—or anyway in some cosy nightclub. 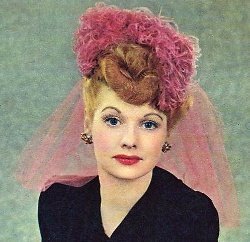