It is not always a matter of wild ovations and legendary performances. Sometimes you are just happy to get through an opera without trouble.

Luciano Pavarotti
I think a life in music is a life beautifully spent and this is what I have devoted my life to.

Luciano Pavarotti
I am a very simple person. In spite of all that has happened to me, I have tried to remain the simple person I started out.

Luciano Pavarotti
As an art form, opera is a rare and remarkable creation. For me, it expresses aspects of the human drama that cannot be expressed in any other way, or certainly not as beautifully.

Luciano Pavarotti
Nothing that has happened has made me feel gloomy or remain depressed. I love my life.

Luciano Pavarotti
For all three of us, the Caracalla concert was a major event in our lives. I hope I am not immodest to think it was also unforgettable for most of the people who were present.

Luciano Pavarotti
I'm not a politician, I'm a musician. I care about giving people a place where they can go to enjoy themselves and to begin to live again. To the man you have to give the spirit, and when you give him the spirit, you have done everything.

Luciano Pavarotti
I am not a musician. I don't go in too deep. If you have the music in your head, and you sing it with your body, then you'll be alright.

Luciano Pavarotti
I think an important quality that I have is that if you turn on the radio and hear somebody sing, you know it's me. You don't confuse my voice with another voice.

Luciano Pavarotti
In opera, as with any performing art, to be in great demand and to command high fees you must be good of course, but you must also be famous. The two are different things.

Luciano Pavarotti
Every day I remind myself of all that I have been given. … With singing, you never know when you are going to lose the voice, and that makes you appreciate the time that you have when you are still singing well. I am always thanking God for another season, another month, another performance. 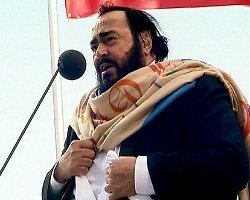 Creative Commons
Born: October 12, 1935
Died: September 6, 2007 (aged 71)
Bio: Luciano Pavarotti, Cavaliere di Gran Croce was an Italian operatic tenor who also crossed over into popular music, eventually becoming one of the most commercially successful tenors of all time.
Known for: